Name: Beekeeping Tool Set
Material: plastic / stainless steel
Size: as shown
Application: Beekeeping use
Features: high quality material, safe and non-toxic, This queen rearing equipment set is used for laying eggs to raise queens.
You can simply put it at the bottom of a hive frame, easy to use.
Not easy to break and aging, non-drug, non-toxic, light weight and harmless to bees.
A very useful beekeeping equipment tool to help you more good breeding and management of bee.
Package:
1 Pcs x Cultivating Box
120 Pcs x Brown Cell Cup
20 Pcs x Queen Cage
1 Pcs x Queen bee mark bottle
1 Pcs x Beekeeping Clip
1 Pcs x Move worms needle
1 Pcs x Round Prisoner Cage
Steps for usage:
Step 1: You insert the comb kit cup for beginners in a frame and 110 brown cell phone are mounted on the back. (With this kit you will be able to create your own queens and do it without grafting and love touching one of the larvae .)
Step 2: Next you limit the queen in front of the cage and she immediately puts the eggs in the 110 available cells. It may also be a launch the next day. on the fourth day each newly hatched larvae is ready for the transfer.
Step 3: You remove each cell starter cup holder and insert it into a cell phone).
Step 4: Then you slipped this unit into a cell phone holder that is attached to a bar mobile phone.
Step 5: To end the cells you now put the cell bar in a cell building the colony.
Note: All data is measured by hand. If there is any error, please refer to the actual product.
Due to the lighting, the display will have different color, please refer to the actual product. 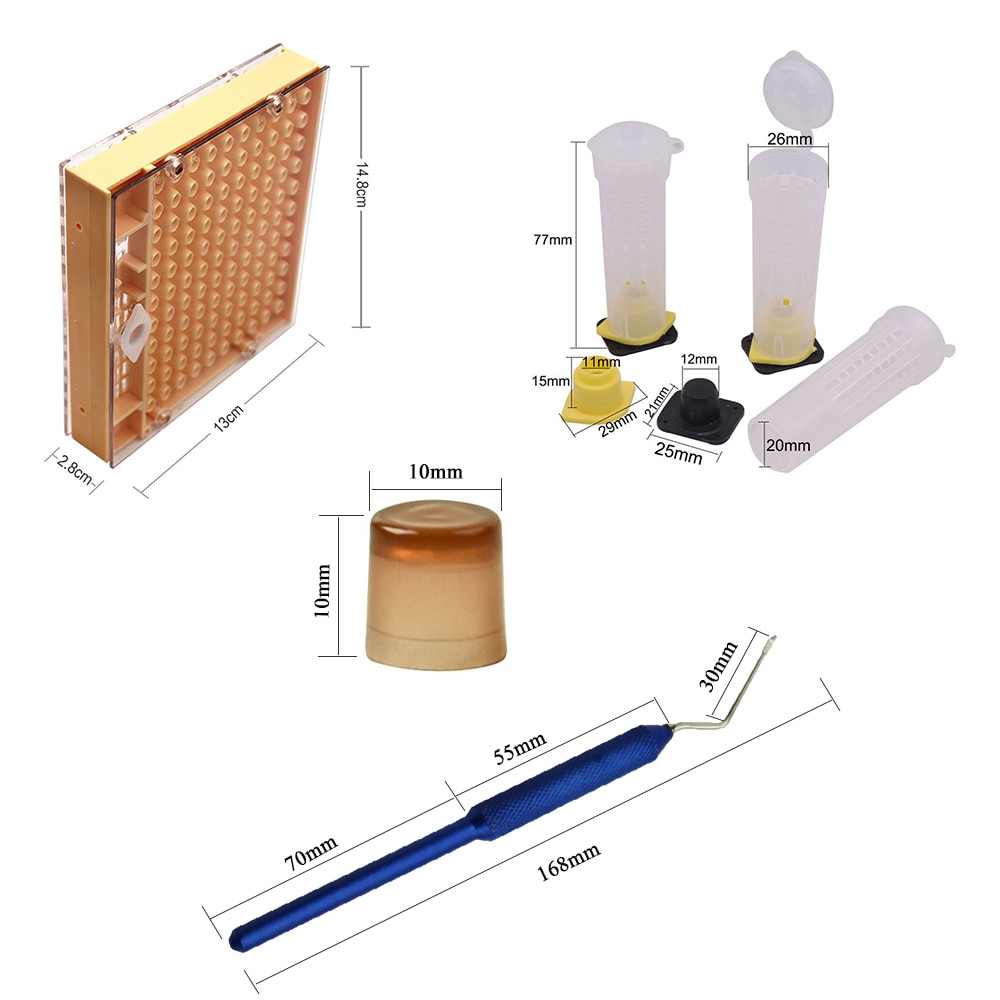 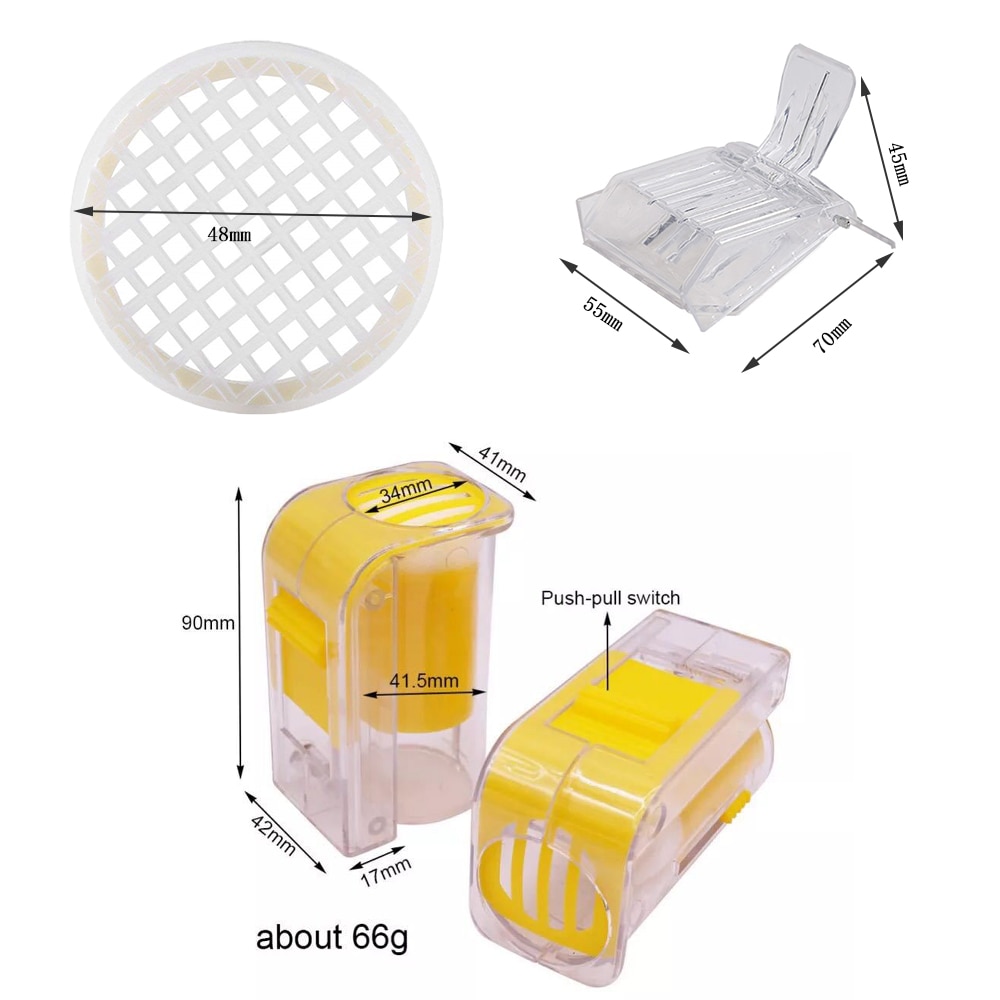 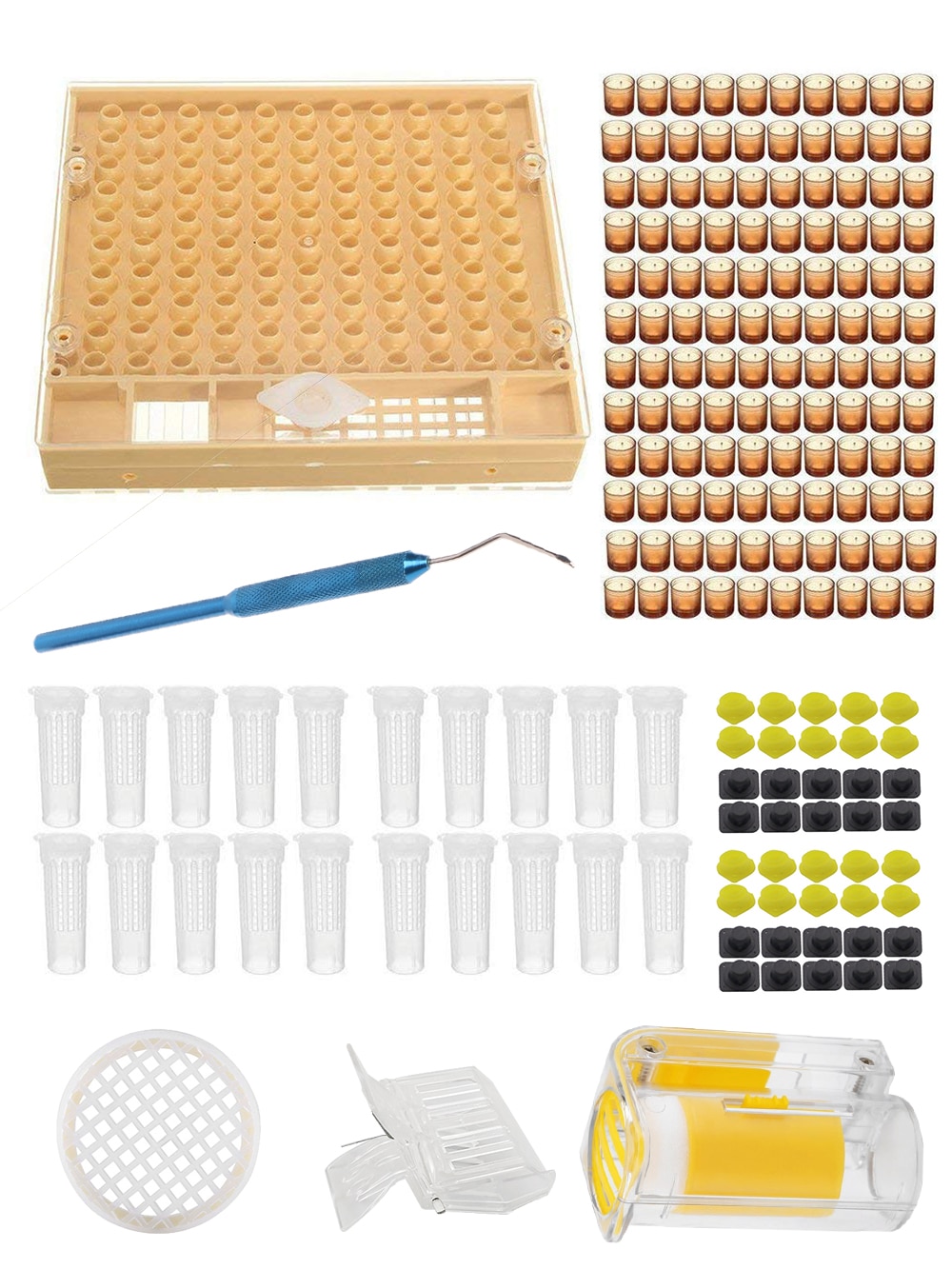 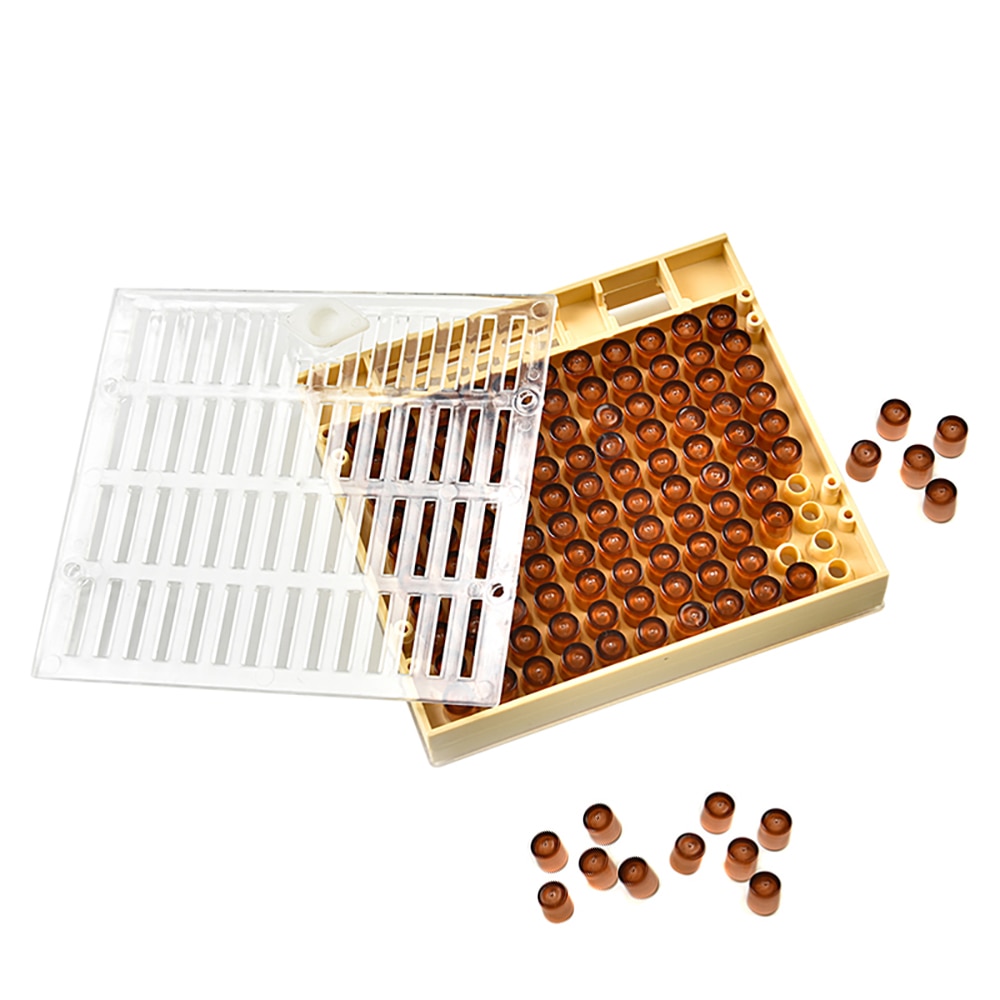 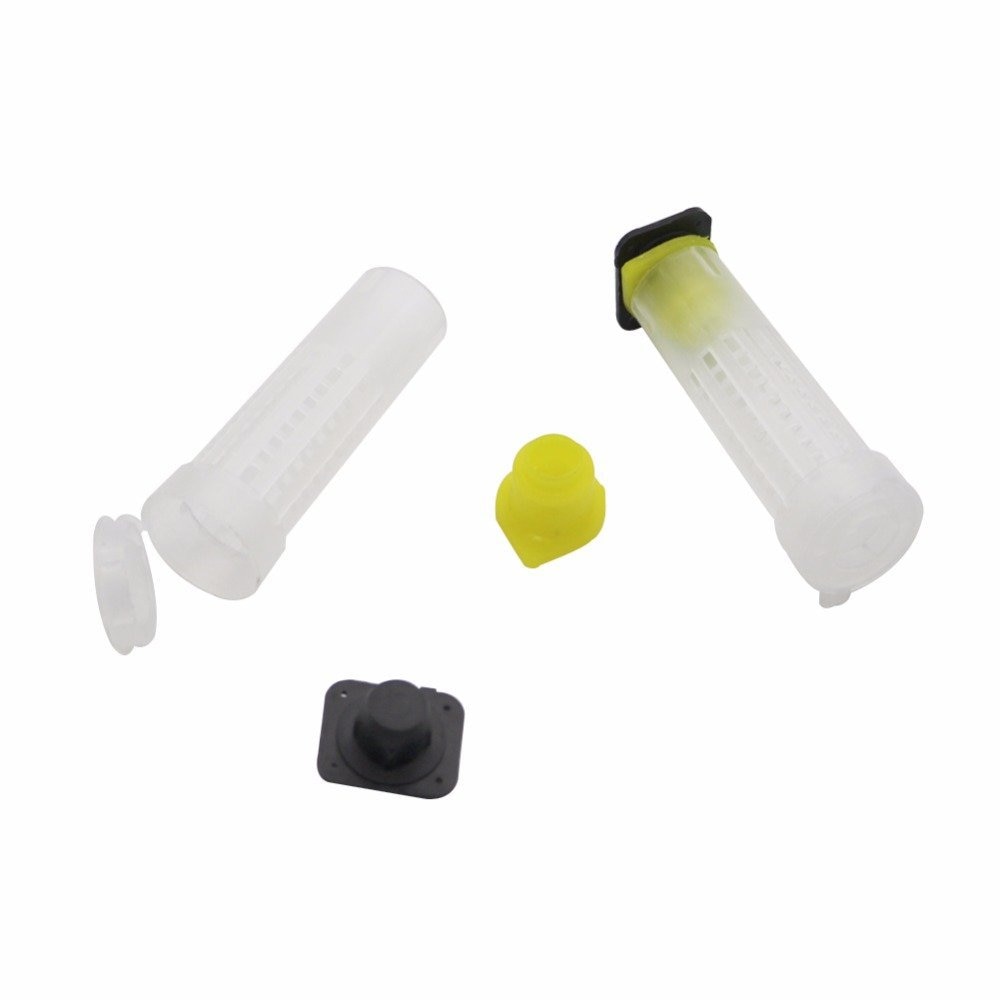 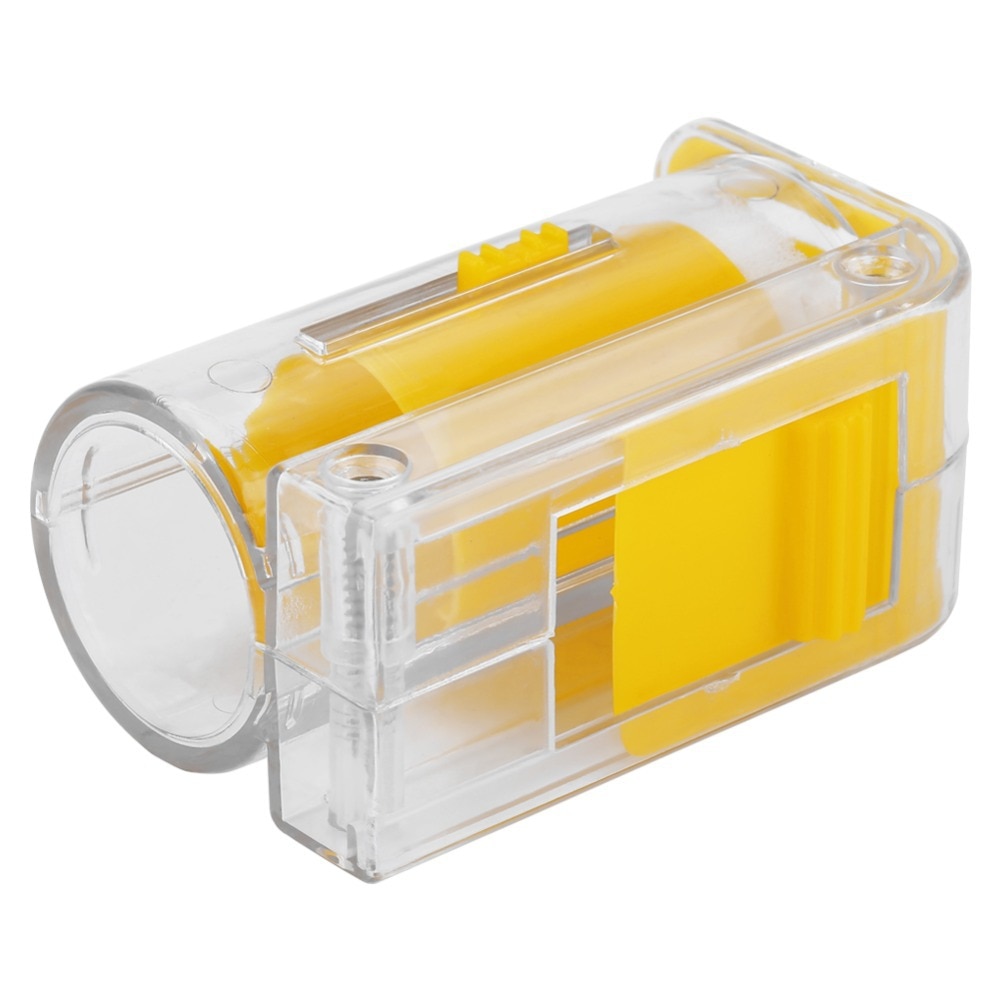 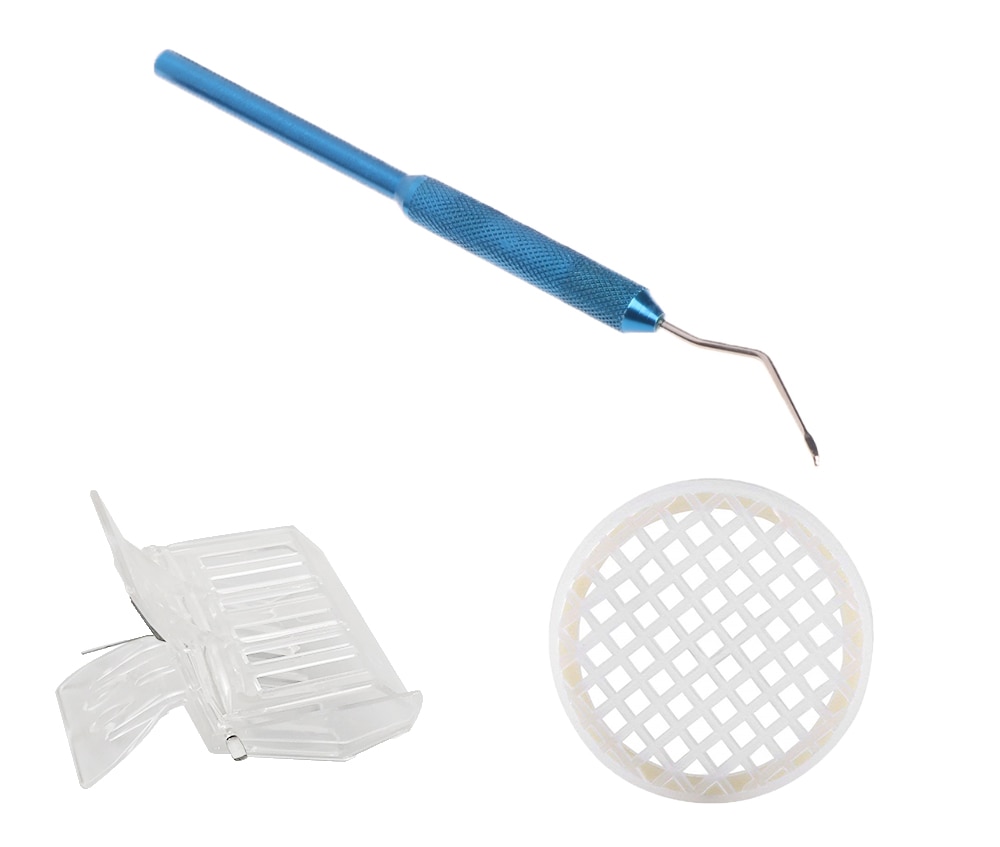 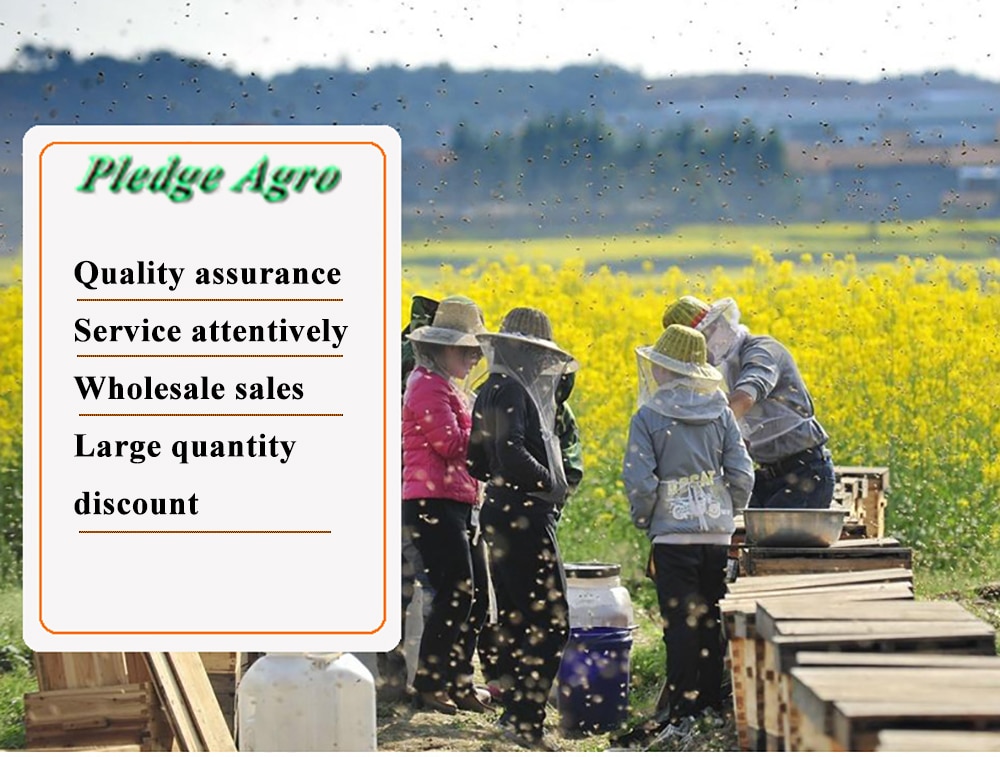 Beekeeping master experience: (for reference only)

1. Cultivate the queen bee during the vigorous source of honey source.

2. Soak the Yuwang box for 2 hours or more with cold water boiled in beeswax.

Point 5: Cultivate the queen bee with the Yuwang box

Yuwang time: The time when the queen bee is cultivated in spring and autumn, most beekeepers will concentrate on the rapeseed period in spring and the camellia (sesame cotton) in autumn, because the climate is more suitable in these two periods, and the outside is rich in honey. The quality of the cultivated queen is better, the success rate of the mating is very high, and the autumn camellia (sesame cotton) period needs to pay attention to the wasp. The wasp is easy to cause damage to the new queen, and it should be eliminated in time.

The location of Yuwang: The place where the queen bee is cultivated should avoid the wind and the sun, avoiding the wind blowing. In the spring, the outside temperature is still relatively low. It is necessary to pay attention to prevent the queen bee from being frozen. In addition, the bee colony used to cultivate the queen is stronger, generally better 12 More than enough bees, food is sufficient, and it is best that the bee kings of this group are excellent, have a good performance of collecting honey, pay attention to supplement feeding when the outside is insufficient, and carry out appropriate reward feeding to promote the enthusiasm of bees. In particular, before Wangtai has not blocked, it is necessary to promote the worker bee to secrete high-quality royal jelly to feed the queen bee larvae.

Population selection: It is necessary to select a strong group of bee breeding kings with strong ability to lay eggs, honey, royal jelly, bee pollen, etc. It can be introduced from a regular species of bee farm, or it can be cultivated from the field. It is best to introduce a king from the field every 2 to 3 years to avoid seed degradation.

Strong group breeding king: Strong conditions in all aspects are better. There are more than 12 bees, the number of baby bees in the nest is large, and the number of young bees is high. Restrict the original queen bee in the nest box, select 1 or 2 small larvae spleen, first put the king frame with Wangtai in the middle of the larvae of the two larvae for 4 to 6 hours, remove and move into the 2 day old larvae to promote their acceptance, as long as Can accept a few. After 24 hours, remove the larvae, use the writing brush to brush each of the worms that need to be transferred with the royal jelly, and then move into the appropriate larvae within 12 hours. If the Queen of the Department of Education leaves the house on the 11th day after the transfer, the quality will not be too good. Only the Queen who is out of the house on the 12th day or the night is the best place.

Tending the tail group: It is better to use 1 to 2 box bees, and the honey powder is sufficient. Large group size will waste the feeding ability of worker bees, which is unfavorable to the development and production of the whole audience. One day before the Queen left the house, the bees that placed the queen bee in the mating group had more honey. If the queen had a residual limb and a small body, he should be eliminated immediately. The Queen’s maternity spawning is usually on the 9th to 11th day after leaving the house. For the next 12 or 3 days, the Queen who has been over half a month should also be eliminated. After the Queen began to lay eggs, whether it is a good king or not depends on the performance after spawning.

The quality of the queen bee is determined: see how many eggs are laid, the size and order of the spawning area, the ability of the offspring to collect, the ability to resist disease, etc., and the performance of all aspects can be determined. In the mating group, after the production of 1 spleen egg, the egg spleen should be immediately replaced with the empty spleen in the strong group. After the spleen egg is produced, it is induced into the production group for further performance investigation. In the production group, spawning, honey production, pulp production, pollen production, etc. are not lower than the output of the same group, and even higher, this new king can be regarded as a good king.

1. Introduce the queen bee to the short-term king group. When the outside world has a medium honey source, and the introduced group has a child spleen, you can (1) use a direct introduction method to lure the queen bee. Introduce the king of spawning to Wang Wuqun. The roots should be introduced according to different seasons and different situations. In the general honeymoon period, the introduction of the two-hour spawning king from the Yuwang group to the short-term loss group can be directly introduced. 2 to 4 hours before the introduction of the queen bee in the evening, first destroy all the kings in the group: a. Be careful to place the queen on the door of the kingless nest, let the queen be able to climb into the nest; b. gently uncover Box cover, try not to alarm the bee colony, put the queen bee carefully on the beam on the nest frame, let the queen bee climb into the spleen himself; c. You can also raise a spleen bee from the kingless group that accepts the king, shake it off At the entrance of the nest, the queen bee is placed in the chaos, and the queen bee climbs into the beehive with the worker bees and goes to the hive.

5. The young bee introduction method induces the queen bee. For the more expensive species of bee kings, be sure to introduce the baby bee introduction method. 2 pieces of the old spleen spleen that is out of the house in the Wang group are mentioned in the upper and lower partitions (or the horizontal partition of the same box), so that only the young bees, the bee area and the young bee area are in the secondary box (or the horizontal partition of the same box). Separate the gauze and put the bee king and the worker bee accompanying the queen bee into the bee area. After 3 days, the number of bees to be released increased, the queen bee lays eggs, and the abdomen enlarges and then destroys Wangtai in the bee area, and the iron yarn is removed. The baby bee area and the adult bee area are connected and merged into a group.

6. Introduce the queen bee to the worker bee. When the bee colony loses its king, there is no small larva or egg in the group that can be used to rebuild the bee king. A few worker bees in the king bee colony will develop after 2 to 3 days, and will be born in the bee nest a few days later. Unfertilized eggs. The eggs laid by the worker bees are all male bees, and the individual is smaller than the normal drone.

In the early stages of spawning, worker bees usually have a single egg in the nest and even lay eggs in Wangtai. Inexperienced beekeepers are easy to mistakenly believe that they are eggs produced by queen bees, but they can’t find bee kings. As long as they are carefully compared, they can be discerned: worker bees are not spawned in an orderly manner, and there are often leaking nests. The worker bee has no bee king at the end, and the egg is not produced in the center of the bottom of the nest. In the later stage of the industrial production, a few eggs were produced in a nest, and the eggs that were laid down were very confusing. The bee colony of worker bees spawning often has discomfort, a large reduction in attendance, etc. The body color of the worker bees in the group begins to become black and bright, the belly is yellowish black, easy to be excited, and actively attack people and animals close to the bee colony. A hoarse voice.
The bee colony that has been laid by worker bees has generally not accepted the external Wangtai. After the spawning bee finds Wangtai, it bites Wangtai like a queen, but can accept the queen who has just left the house for 2 to 3 days. The king who had just left the house, the young bee king with soft and wet body, similar to other young bees without borders, is easily accepted by the bee colony. After the queen has successfully started spawning, the bee colony can gradually resume normal activities, but the bee colony of more than 20 days is difficult for the queen to be attracted.

7. Change the king of bees to the king. For Wang Qun to change Wang Ying first to take the group of the original Lao Wang, artificially caused the loss of the king 10 hours later, and then into the new king according to the plan. When inducing, first remove the group of eagerly created Wangtai, which was transformed by the queen bee colony, and then induce the new king by indirect lure.

There are no reviews yet.

Only logged in customers who have purchased this product may leave a review.